I’ve owned 3 English Bulldogs over the course of 17 years. Obviously, I can only speak from my own experiences. But during those years, I’ve learned quite a bit about English Bulldog health problems and bulldog medical issues in general.

My first bulldog lived almost 12 years, and wound up having multiple medical issues.

For the majority of her puppy-hood, she was extremely healthy. Which made me initially question why so many people had said English bulldogs were so expensive to own.

I was pretty surprised (pleasantly, of course). And I also considered us to be extremely lucky to have avoided any bulldog medical issues. Or so I thought. And then, as she got a little bit older, things began to change. 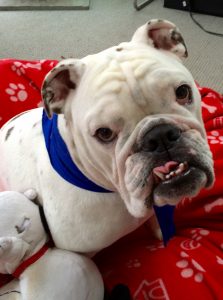 Roughly around the age of 2, my English Bulldog developed skin allergies. One morning, she had broken out in hives all over her face and body. This was a time when I was also pretty sick, and was battling a bout with vertigo.

But when my girl came walking up to me with a super puffy face, I jumped into action. I was so afraid the swelling would affect her ability to breathe, that I knew there was no time to waste.

English Bulldogs have a hard enough time breathing. Adding another layer of difficulty to the mix is just a disaster waiting to happen.

So I packed her up, and headed to the vet. Driving very, very slowly — since I was still quite dizzy from my vertigo. And luckily, the vet’s office was only ~1 mile from my house.

This initial vet visit resulted in a steroid shot, to reduce the inflammation. Going forward, my vet suggested we use over the counter allergy medication as needed.

Here are some other products I always keep on hand, to keep my bullies healthy:

A gentle cleanser with peppermint oil, witch hazel, and tea tree oil, that cleans, soothes, and removes excess moisture. Bulldogs may scratch or rub their ears when allergies are causing discomfort. This all-natural cleanser will help alleviate the itchiness in their ears.

These alcohol-free wipes are great for quick cleanups to your bulldog’s coat, and also keep them smelling fresh. The moisturizing conditioners help maintain a shiny coat, as well as calming itchy skin.

Also, the wipes are a fairly large size, so one wipe goes a long way. I have a young bulldog who loves to roll around in the dirt. When she comes back inside, I wipe her down with one of these and she is good to go. And the honey sage scent is awesome.

This Anti-bacterial and Anti-fungal Wrinkle Paste Cleans and Protects your Dogs Wrinkles, Tear Stains and Tail Pockets. Featured on BuzzFeed, this product acts as a natural barrier to bacteria and yeast that often builds up in bulldog skin folds and wrinkles. It’s made with very few ingredients including zinc oxide and coconut oil, and repels water to minimize fungal growth.

When my older bulldog was still pretty young, she started having Urinary Tract Infections (UTI). As she got older, UTI’s  continued to occur roughly twice a year.

Then as she grew older still, they began to present more frequently. I felt like I was taking her to the vet for a UTI every month or so, with no relief.

Eventually our vet put her on continuous medication for UTI’s, since she could never quite get rid of them.

The UTI would present itself as blood in the urine. And let me tell you — the very first time that happened, I was close to tears. I had no idea what it meant, and I was so fearful that something was seriously wrong with her.

It was in February, in the middle of winter. When I took her outside to do her morning business, I noticed little droplets of blood in the snow. And I freaked out.

Little did I know, this would turn into a fairly “normal” occurrence, for the rest of her long life. The vet tested for anything and everything. He never found calcium deposits or bladder stones. We took multiple x-rays, and also scheduled several appointments for a cystocentesis to pull urine samples directly from her bladder.

In order to prepare for the cystocentesis, I had to bring my bulldog to the vet first thing in the morning, before she was able to empty her bladder. The vet would then use a super long and skinny needle to draw urine directly from her bladder.

Have you ever tried to bring a dog to the vet, first thing in the morning, before allowing them to empty their bladder or bowels? It’s not easy.

We had false starts on several occasions, where I’d get her to the vet’s entrance and she’d squat and pee on their Welcome mat. At one point, they told me to try to carry her into the building, so she wouldn’t have the chance to eliminate unexpectedly. My bulldog weighed 58 lbs. Lifting and carrying her from my car into the building was a challenge, to say the least.

But at the end of the day, we were able to obtain a “pure sample” — and when tested, it only showed some bacteria, skin cells, and blood.  So in other words, the vet wound up treating for a UTI.

This was the reason I started inquiring about putting her on continual medication as she got older.

It just seemed pointless to treat the symptoms, get cleared, and then have to start over again a month later.

Since none of the other tests amounted to a definitive result, we decided to decline the ultrasound. (Again, this was my family’s personal choice, which may have different circumstances and outcomes in your particular situation. It goes without saying, I am not a veterinarian so can not provide advice for you or your pet. Please contact a professional.)

Other things we did do to try to improve her health during this time, was to change her food throughout the years. Feeding her a grain-free protein-rich high quality dry dog food was found to be best for her.

This same bulldog also had 2 cruciate ligament tears, which occurred 3 years apart, and both required surgery as well as physical therapy as a recovery treatment.

How does an English bulldog tear a cruciate ligament? Well, it sure isn’t by playing basketball —

In dogs, an ACL tear is actually called a CCL tear. CCL stands for Cranial Cruciate Ligament, and it’s the equivalent (or at least similar to) a human having an ACL tear. The Cranial Cruciate ligament connects the thigh bone with the lower leg bone, and stabilizes what’s known as the “stifle” joint. The stifle joint is basically the canine equivalent to the knee.

When a dog’s CCL is torn, they cannot put weight on that leg. You’ll be able to tell, if your dog is holding up their back leg. It might be a partial tear, and they may be able to put a little bit of weight down. But if there’a full tear, you’ll know it (or at least have a pretty good idea.)

Many dog owners want to know if a torn CCL requires surgery, or if it can be treated at home, or even holistically. From my experience, you should always consult your veterinarian.  They will be able to assess your dog’s unique situation, run tests, and come to a complete determination for proper treatment. But if the CCL is fully torn, I personally believe surgery to be the way to go. After all, this is your best friend we’re talking about here.

A few other bulldog medical issues/ailments I can think of were little blisters she’d develop between her toes, that would become yeasty and infected. I’d give her foot baths in Epsom salt to relieve the inflammation.

A staple in our household for treating yeasty paws, and also cleaning out dirty crevices — Douxo Chlorhexidine pads. Note: Do Not use near the eyes, as it will sting. But this is great between wrinkles, nose folds, and anywhere else your bulldog may be itching.

And she also had two canine root canals to have her upper “fangs” removed. The first one she broke chewing on a hard bone, and the second one broke after I found her chewing on a baseball that my son left laying on the floor.

She had quite the history, but was my perfect girl. 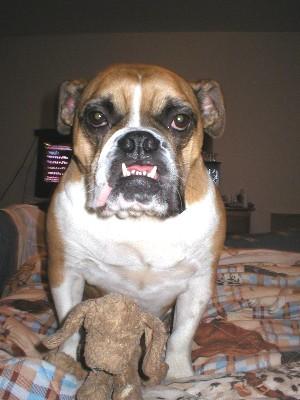 My two subsequent bulldogs haven’t had as many medical issues (but they’re still young!). Both developed “cherry eye” (prolapsed tear gland of their third eyelid) as super young puppies and required surgery to tuck the glands back in. This, of course, required the specialty of a doggie eye surgeon, so was not cheap. But if you don’t make the repair, it will affect their ability to create natural tears and would require eye drops for the rest of their lives — not good.

Here is a video of Gus when he was roughly 4 months old, just before his eye surgery. You can see one of his prolapsed eyelids, or “cherry eye”. The opposite eye presented itself shortly before his surgery, so we were thankfully able to have them both corrected at the same time.

Arthritis and Joint Issues in Bulldogs

My older boy started developing arthritis when he was only 2 years old. Nope, that’s not a typo. At the young age of two, he started taking medication as needed for arthritis treatment.

And all of my bulldogs have been on joint supplements

which I believe is a must for the breed, since they also have the genetic tendency to develop hip dysplasia. If you have an English bulldog, starting them out on joint supplements is important.

Robin is a long-time bulldog enthusiast, and dedicated bullie mama.

She spends most of her days surrounded by grunty and slobbery bundles of joy, and wouldn’t have it any other way. In fact, she loves her dogs more than most people (only slightly kidding…) But she also enjoys sharing her personal stories and experience related to this amazing and unique breed.

Robin is a long-time bulldog enthusiast, and dedicated bullie mama. She spends most of her days surrounded by grunty and slobbery bundles of joy, and wouldn't have it any other way. In fact, she loves her dogs more than most people (only slightly kidding...) But she also enjoys sharing her personal stories and experience related to this amazing and unique breed.